We live in an age of obsolescence, we’re much of our older technology often finds its way into landfills, replaced by something newer, faster, and with modern software.

We often believe that if a computer is no longer able to properly run an operating system like Windows, then it has essentially lost all of its usage, and is not worth keeping around.

The truth is, however, that much of the older technology that we keep around, such as older laptops, are very much still capable of providing us with plenty of usage.

Even though they may not be sporting the very latest hardware, with the right operating system and maybe the odd upgrade, it’s possible to bring even the oldest computer into the modern age.

Before we look at the various software available for older computers, it’s important to first take a look at what hardware is recommended for basic upgrades. One of the most advisable upgrades to make to an older machine is to replace the storage device – usually a hard drive – with a solid state drive.

Not only does this massively increase the speeds of the computer, but it can also add at least another 5 to 10 years of life. Additionally, adding more RAM can offer improved speeds overall, but it may be difficult to find the correct RAM if the computer is quite old.

Chrome OS is Google’s famous operating system that’s based on their internet browser, Chrome. It’s a lightweight but powerful system that’s capable of providing all of the features that the Google ecosystem has on offer.

The problem is, however, that Chrome OS isn’t available on devices that aren’t official Chromebooks, but there is an alternative: CloudReady. While it doesn’t quite have the same functionality, CloudReady has the same foundation as Chrome OS as well as being completely free. It’s a great way of giving new life to an old machine.

The sister distribution to the very popular MX Linux, antiX is designed from the ground up to be compatible with even the oldest of computers. Offered in both 32-bit and 64-bit architectures, and requiring only the most basic of hardware, antiX, much like CloudReady, is a powerful way of taking an otherwise old laptop or desktop and making it like new.

It’s free to download, extremely easy to install, and can run on just about any hardware and software imaginable, even if it’s just a game of Canadian slots online. 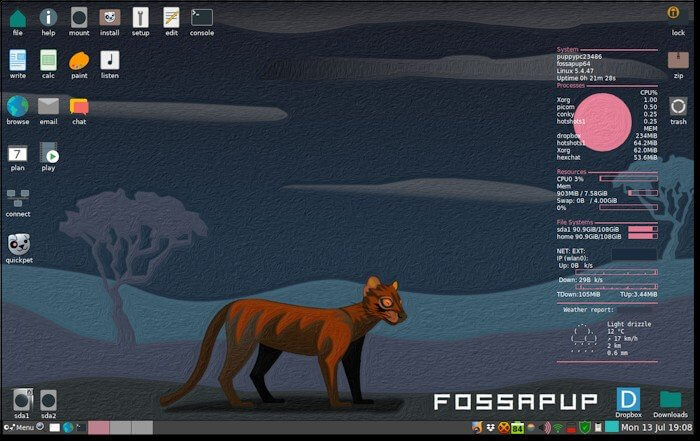 One of the oldest Linux distros on the internet, Puppy Linux is similar to antiX as they both aim to bring out machines out of obsolescence. Puppy Linux, however, can run on computers that are even older, as far back as the 1990s, and with as little as 256 MB of RAM necessary to get it working.

It’s not as pretty as most modern operating systems, and it can take some tinkering to get it just right, but users will find plenty of usability, especially if they want a machine that can do basic word processing or for a media centre.